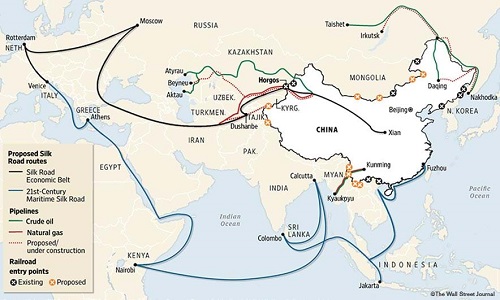 With the latest controversy over a scheduled visit of Chinese research vessel Yuan Wang 5, which India claims to be a spy ship, to Hambantota, Sri Lanka has been dragged into the centre of a tussle between China and India. The matter got even more complicated with Sri Lanka officially asking China to defer this naval visit in the face of severe opposition from India.

The matter however got resolved at least temporarily after several days of negotiations Sri Lanka government had with the relevant stakeholders -- China, India and the US. However all the signs are that Sri Lanka will continue to suffer similar diplomatic headaches unless the country finds a way out of the geo-politics of the region.

There was a similar incident previously in 2014 though it did not escalate to this level when India officially protested to the government of Sri Lanka over two Chinese submarines separately docking in a Chinese built terminal in the Port of Colombo.

In the eighties President J R Jayewardene’s close ties with the United States and poorer relations with India and the growth of LTTE’s terrorism in the northern Sri Lanka resulted in a tense situation with India.

The final outcome was almost forcible entry of Indian forces into the country and eventual signing of the Indo Lanka Peace Accord which also had a clause preventing the Sri Lanka soil being used by any third party in a manner prejudicial to India’s national security interests.

All this is clear evidence that we have mismanaged our regional affairs particularly the relations with our closest neighbour India. The issue has a long history with intermittent invasions from India with Chola Empire once extending its tentacles up to the northern parts of Sri Lanka.

Some of these issues got compounded with tacit support extended by India at one stage to separatist groups in northern Sri Lanka who also received military training in India.  In the face of such developments often there had been suspicion between the people as well as leaders of the two countries.

That’s one side of the story but there are many reasons why Sri Lanka should maintain a very cordial relationship with its closest neighbour.  The historical link from the arrival of Prince Vijaya and subsequent spread of Buddhism into Sri Lanka from India are sufficient reasons for the two countries to have strong relations with each other. In that sense India is our closest relation with whom we share a wealth of historical, religious and cultural legacies.

That way Indo - Sri Lanka relations have to be something of a special nature which goes beyond a normal trade or commercial relationship. On the other hand China is an emerging great power with whom Sri Lanka has had long relations particularly commercial links from the fifties and a great friend that we can never afford to lose. China also has come to our aid during our difficult times such as during the bitter war with the LTTE in the north and east and subsequently helped us in many infrastructure projects.

However managing and balancing our relations with these two countries have become difficult for Sri Lanka in the face of growing tension between India and China. China’s entry into Sri Lanka in the last two decades through investments into ports, airports and the Port City has led to India’s suspicion over possible use of some of these facilities to the detriment of her own security interests.

Given our geographical location and economic involvements we cannot stay clear of this issue and it is important for us to keep our development options as a maritime hub without succumbing to pressures of either India or China. Our future success will depend on how well we can resolve this issue.

The situation becomes further delicate as Sri Lanka is currently in a deep economic mess and we need the assistance and the cooperation of both India and China as partners of economic development.

All this is closely linked to China’s revival of the ancient Silk route in which Hambantota Port is a vital link and its natural for China to assert her rights which she says is all about freedom of navigation in the high seas and call at a port is part of that. It’s a larger regional issue beyond the capacity of Sri Lanka to resolve.

Balancing these two factors requires the best of diplomatic skills. Diplomacy with much professionalism and political maturity on the part of our leaders is a vital necessity for Sri Lanka and it will become more so in time to come. Only a neutral but proactive and clear cut and transparent foreign policy with emphasis on strategic regional and global affairs will help the country to avoid facing unwanted issues in the future.

Strengthening our economic relations beyond India and China is vital in our efforts to become an international maritime hub and Japan is an important first step in that direction. Then the next step has to be involving the British, European and US investors in vital sectors such as shipping and power and it is only by doing so Sri Lanka can extricate itself out of this Indo Chinese power struggle. Sri Lanka needs to emerge as a maritime service centre for all and not just for India and China.

What we see today is exactly what happens when leaders deal with a country as it is their personal property ignoring the vital diplomatic a strategic implications. First you work with China to the exclusion of India and when there are repercussions you try to work with India to the exclusion of China and there is no diplomacy at all.

Playing one country against the other has its limitations and there is a greater risk of losing both friends at the end. What we need is a regime of professional diplomacy with transparency in all our external relations with full involvement of trained diplomats and lessor involvement of politicians.