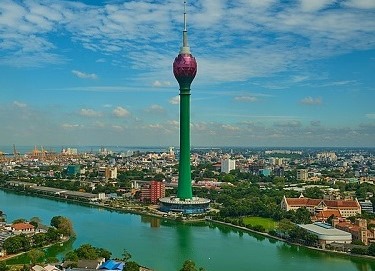 Adding a new experience for the people of Sri Lanka, the operations of the tallest self-supported structure in South Asia, the Lotus Tower will commence operations from the 15th of September.

With the commencement of operations of the Lotus Tower, which was built at a cost of nearly US$113 million, the Colombo Lotus Tower Pvt Ltd intends to offer the Sri Lankan public a novel experience.

A Chinese company granted US$ 88.65 million and the balance cost has been borne by the Sri Lankan government. The loan instalments are due to be completed by 2024. Already, US$ 66.3936 million of the loan has been paid.

Colombo Lotus Tower Company is a company established in March this year under the Treasury, and all its transactions are audited by the Auditor General's Department.

The loan agreement between the Telecommunication Regulatory Commission and China was initiated and the work on the Lotus Tower commenced in 2012.

Although its construction was planned to be completed in 2015, the targeted date of completion could not be met. The Chinese company completed the construction work and handed over the Lotus Tower to the Government of Sri Lanka on February 28, 2022. Thereafter, Colombo Lotus Tower Pvt. Ltd. was established and its operations were entrusted to the company.

The Chief Administrative Officer of Colombo Lotus Tower Pvt. Ltd Major General Prasad Samarasinghe (Rtd), said that Lotus Tower is planned to avail new technological experiences along with entertainment similar to those found in wealthy countries around the world.

Among the attractions offered at Lotus Tower are adventure sports such as sky-diving and bungee jumping. Samarasinghe explained that so far 80 percent of local investors and 20 percent of foreign investors have joined the investment opportunities at the Lotus Tower.Dialog Telecom Company and Sri Lanka Telecom Company have already reached agreements for investments of Rs. 200 million each.

With the commencement of operations, anyone can avail themselves of this experience by purchasing a ticket. Tickets are priced at Rs. 500 and Rs. 2,000 while the tickets for foreigners is priced at UD$ 20. It is also planned to introduce a QR Code system in the future instead of a ticket.

The Lotus Tower operations have been designed to meet the anticipated entertainment and recreational requirements of the public. The Lotus Tower is spread over 10.5 acres of land and will no doubt become an entertainment haven for the youth who desire adventure sports.

Colombo Lotus Tower Pvt Ltd. states that it is currently negotiating with 58 investment companies and have already expressed interest in entering into agreements with 22 of them, and orders for 15 different events have been received until December 31st, this year.

The chief administrator stated that after 2024, Lotus Tower will create the necessary environment to ensure profitability as a company and plans to continue its operations without burdening the Treasury. Samarasinghe further stated that it is planned to carry out all these operations more successfully from January next year.

The first floor is expected to be allocated for offices while it will also have a digital cinema hall. The third floor consists of a conference hall, which can accommodate up to 400 people at a time. Meanwhile, the open floor has been designed in such a manner that it can be used for various entertainment activities.

On the first floor, shaped like a lotus bud, a reception hall has been constructed that can accommodate about 400 people, and the top floor is equipped with a revolving restaurant which no doubt, will be a novel experience for the public. Further, the public will also have the unique opportunity of experiencing a bird’s eye view of the Colombo skyline from the highest observation deck.

Lotus Tower is also equipped with three of the fastest lifts in the country, made in line with Japanese technology. The public can look forward to experiencing these unique attractions when the Colombo Lotus Tower commences operations on the 15th of September.

Lotus Tower to be made Sentosa like entertainment centre