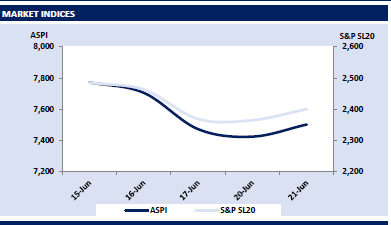 ASPI revives on a narrow gain

Bourse retaliated to the green territory after 5 consecutive losses as investors pinned some hope on market activities following the cabinet of ministers approving the draft 21st amendment to the constitution.

Index opened on an upsurge as investors bargain hunted on popular stocks but gradually lost momentum as participation levels failed to sustain the upbeat.


Meanwhile the bond market remained dried-up and the secondary market yield curve remained broadly unchanged as the overall market witnessed a dull sentiment. During the day, 01.06.25, 01.05.27 and 15.01.28 maturities traded at a same rate of 21.00%.

Broad market up with a 2-week high turnover