Home Market Did the need for protection influence the conscience vote? 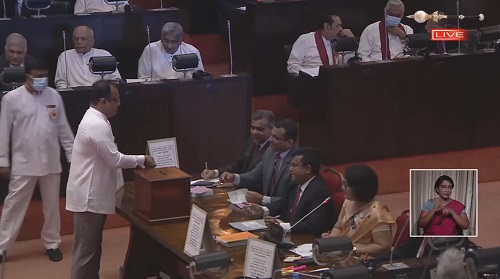 Often I don’t agree with Wimal Weerawansa, but he was spot on, when he said the paramount consideration of parliamentarians in electing Ranil Wickremesinghe as President was their own protection.

For days and days valuable ideas were debated and discussed in the parliamentary circles on how MPs should exercise their vote when electing a President at a crucial moment. Many tentative agreements among political parties and groups were announced. People behind those moves claimed they were acting in the best interest of the country.

However, the final results baffled everybody and it seems to be the power of the conscience vote. Had the voting been on the customary show of hands much of the usual manipulations would have worked and result would have been probably different.

Practice of the conscience vote is resorted to in this type of situations as a definite result without controversy is essential to resolve a vital issue at hand. Most of those who voted including a presidential nominee had by that time not only experienced painful effects of arson and looting but also had fears about their own lives.

By that time Ranil Wickremesinghe in his capacity as the acting President had succeeded in preventing the seizure of the parliament by the protestors and brought the situation under control to some reasonable degree. He would have definitely had an edge over the others, if security was a vital consideration in the minds of the parliamentarians.

Then there are unproved allegations of horse trading in parliament with money being thrown to secure votes, but there was little room to influence the voting pattern because it was a secret ballot; anyone could have accepted money if it was so given, yet exercise the vote according to his or her conscience.

Psychologically there is a tendency for people to be united when they are under a common threat and this thinking would have helped Pohottuwa group to be re-united in this instance despite the group being split into several independent groups.

The natural outcome would have been for them to stand behind Ranil Wickremesinghe who had by that time proved that he was able to provide the much needed security and Weerawansa appears to have read it correctly.