Home Market Investors take sidelines as the bull-run slows down 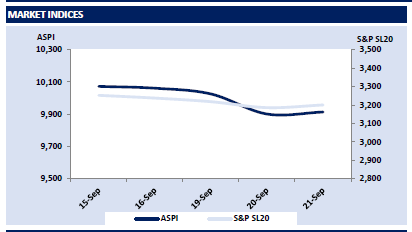 Investors take sidelines as the bull-run slows down

Bourse narrowly moved to green amidst a volatile trading session as most investors took a sidelined approach seeking direction on policy rates as yields plunged at today’s bill auction ahead of the Monetary Policy review meeting on the 06th Oct.


As soon as the market opened, index see-sawed from red to green with sharp volatility and closed positively at 9,913 gaining 12 points while buying interest was centered mostly on LIOC, SAMP and ACL. Turnover took a downturn compared to yesterday’s session and recorded at LKR 4.6Bn (+18% cf. monthly average turnover of LKR 3.9Bn) while Transportation sector (26%) and Capital Goods sector (19%) collectively dominated the overall turnover with the largest contribution.

Meanwhile, in the secondary market, investor interest witnessed towards 01.07.32 maturity which traded within the range of 29.30%-29.40% although volumes remained thin amidst limited activities.